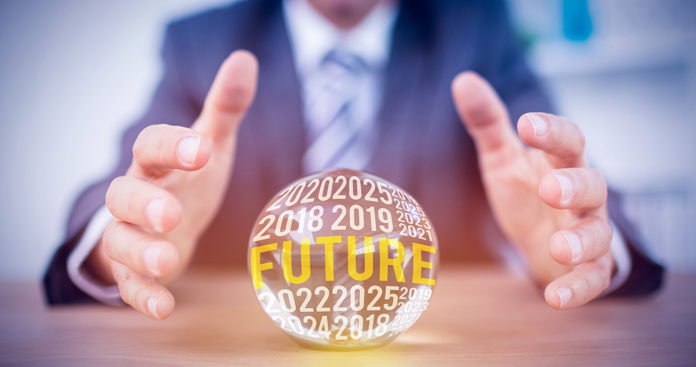 It’s something we’re all compelled to do at this time of year: look back and see if our predictions or, better yet, the predictions of the experts whose opinions we value (or disagree with), were right or wrong. Perhaps there’s a small bit of competitiveness or a glimmer of “I told you so,” if only in conversation with that voice in our head. I will admit that is the case with me. Most likely there’s truly our need to understand that even the most informed experts can miss the mark.

Let’s put a spin on the gaze into the crystal ball and first look back at 2019, what was anticipated but didn’t happen, and then I’ll make some predictions of my own about 2020, with all the of the associated caveats about past performance being no indicator of future accuracy.

Core interest rates didn’t climb. As the Federal Reserve had hiked its benchmark interest rate four times in 2018 and, at one time, projected three increases for 2019, borrowers were warned to expect to pay more. There were no increases. Only decreases. And, at 1.75 percent as of October 2019, the interest rate equals that of March 2018. As a result, many of our collective assumptions about lending volumes and delinquencies were off for the year as well.

The forecasted recession didn’t occur. At the start of the year, the economy was expected to slow amid fears of an impending recession. Now, most headlines, and Federal Reserve chair, Jerome H. Powell, are quick to proclaim no upcoming recession. International trade disputes aside, there are no economic or financial reasons for a U.S. or global recession, although our own behaviors as consumers and investors may yet bring one about.

New auto sales didn’t collapse across the board. Even with record numbers of lessees returning to the market, rising interest rates and vehicle prices were expected to tamp new car buyer excitement. Sub-prime buyers, it was predicted, could have been moved out of market. Edmunds anticipated car sales would drop to 16.9 million, down from 17.2 million in 2017 and 2018, and lower than any year since 2014. As of November 1, 2019, the seasonally adjusted annualized rate is 17.3 million vehicle sales, down 200,000 units from last year, but certainly not a collapse.

Autonomous vehicles don’t feel that much closer. While GM, Ford, Tesla, Nissan, Volvo, Daimler, Volkswagen, BMW, Fiat Chrysler (FCA), Hyundai, Toyota, and Honda are actively working on autonomous or semiautonomous technologies, most have concluded it will be harder and costlier than anticipated. According to Bryan Salesky, chief executive and co-founder of Argo AI, 80 percent of the technology needed for routine use – radar, cameras, sensors for objects far down the road – is available, but the 20 percent needed to anticipate the behavior of other drivers, pedestrians and cyclists will be much more difficult.

The online vehicle buying experience didn’t take over. Vehicles have changed over the years – backup cameras, self-parking, and proximity sensors – and vehicle prices have changed – in 2012 only 6 percent of vehicles were priced at more than $50,000; in 2019 that jumped to 24 percent. But for the most part, the dealership and buying journey are the same. While people do shop online, only 10 percent of buyers negotiate the price online and only 5 percent complete their paperwork online. Buyers who did both spent less time at the dealership and report more satisfaction with their experience.

Next round of connected vehicle platforms take root. While autonomy is proving slower and more expensive than anticipated, connected vehicle platforms (aka the connected car) are moving faster. These platforms deliver cloud-connected services such as proactive monitoring, navigation, in-vehicle digital experiences, such as enhanced exhaust sounds, and allow voice-controlled audio assistants to answer texts and calls and manage different functions with the vehicles. In the state of Utah, busses equipped with special radios communicate to traffic signals and extend the signal time if they’re running late and the state’s Department of Transportation is building data networks and installing intelligent sensors along section of highways to collect and transmit data to vehicle-mounted equipment.

I’m interested in this as a trend for 2020 because these additional connected services offer opportunities to create a “second life of auto finance,” after the initial financing contract is funded. As these services become more sophisticated on new OEM vehicle platforms there will be new moments to collect payments (in-car, on-mobile, via lease add-ons or direct to credit cards) for auto lenders and OEMs.

Capital does become harder to find for finance companies. Originating new loans and leases requires capital and that is especially true for finance companies that can’t tap into new deposit flows like banks or credit unions. While the global recession is less likely and interest rates are down, I’m still seeing some of the previous sources of capital for finance companies reining in their funding and choosing to invest in other businesses/industries. I hope this won’t transpire in 2020, but I am concerned that this trend will make the auto finance industry less dynamic and competitive in the coming year than we would all like it to be.

More banks stop originating indirect auto loans. Like Regions Financial and Bank of the West, other banks may be exiting indirect auto finance. While these banks cite low return and poor potential for developing long-term relationships with borrowers, they are still the exception rather than the rule and most banks have remained interested in auto finance. As with the previous forecasted trend, my interest in this stems primarily from how it may reduce the dynamism of auto financing and whether this public withdrawal from the market has a knock-on effect on the ability of finance companies to then secure capital as well.

Ridesharing slows as a driver of used vehicle sales. Ridesharing companies were once viewed as the future of transportation, as “the way” to reduce the number of vehicles on the road, cut down on pollution and ease traffic congestion. These services were also a significant source of demand for used vehicle sales (and leases) in recent years. The explosive growth of these companies put millions of drivers on our roads at levels we haven’t seen before. As both Uber, Lyft, Doordash, Grubhub and others seek to stem their losses by increasing both fares and their share versus those of their drivers, there will be an impact on the demand for vehicles. Drivers will seek lower cost vehicles, delay refreshing their rides, or go delinquent at greater rates — all of which are reasons why I’m tracking this potential trend.

The arrival of the Chinese manufacturer. Attendance at NADA events in the last few years signals that several large Chinese vehicle OEMs are contemplating entrance into the U.S. market. While delayed, perhaps because of vehicle safety inspections or the establishment of dealer networks, I think 2020 just might be the watershed for this to finally happen.

Gazing into a crystal ball and drawing conclusions is not a science. I’m not even sure there is an art to it either. However, reading and sharing semi-informed insights does make for a for an interesting way to bring one year to a close and begin the one that follows.